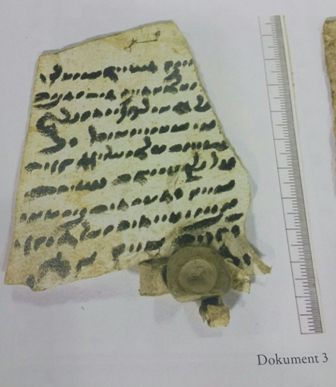 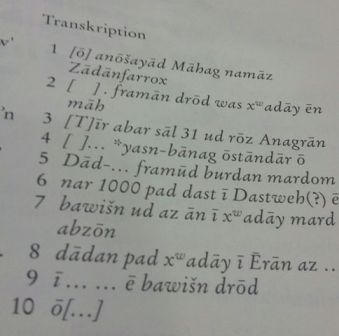 1 – Particularly intriguing is the mention of xwadāy ī Ērān “lord of Iran” in Document 3, whom
one is apparently requested to support with a large number of men (p. 15). Is this is a reference to new Muslim authorities or to the old Sasanian dynasty that still claimed loyalty of some of its former subjects

2 – The documents are dated to the interval of the years 30 and 49, presumably of the Yazdegerd era starting in 632 a.d., which places them in the second half of the seventh century a.d., in the period after the Arab conquest of Iran. Palaeographic data do not contradict this dating, while radiocarbonan alysis broadly confirms it (p. xv). It is therefore remarkable that the published texts appear to make no reference to the Arab presence in Iran (cf. the Bactrian documents of the eighth century a.d., which frequently mention the Arabs). One remains under the impression that the old Sasanian administration continued for a while to function essentially independently from the new structures installed by the occupiers

“ سوال دوم مربوط می شود به رابطه امویان، بخصوص سفیان با مسحیت. پیش گوی های پیامبرانه سنی به یک نتیجه ای نرسید که سفیان مسیحی بودند ، اما این به این معنی نیست که مسیحیت بخش واقعی از این دوره نبود. شیعیان ادعا کردند که سفیان با یک صلیب بر گردن از بیزانس آمدند و یا هنگام اقامت (پناهندگی ) در بیزانس دین مسیحیت را قبول کردند و مسیحی شدند. شاید این یک نوع برتاختن شیعه به سلسله سفیان بود و شاید هم خاطره شیعیان از رابطه خانواده معاویه با مسیحیان بود:
The second question deals with connection of the Umayyads, and especially of the Sufyani, to Christanity. In Sunni apocalypses one could never come to the conclusion that the Sufyani is a Christian, but that does not necessarily mean that it is not an authentic part of the cycle as a whole. In Shia material the Sufyani is a Christian who comes from Byzantium with a cross around his neck; at another point, Umayyads who request asylum in the Byzantine Empire convert to Christianty ( though it is not done with any great enthusiansm). It could be that this is just one more attack to be laid at the door of the hated Umayyad dynasty, or it could be that it represents a genuine recollection of the connection between Muawiya and his family and Christianity (6

There was dissension between them,Three months before Muhammad came. And Muhammad lived ( another) ten Years, And Abu Bakr b. Abi Quhafa, 2 years , 6 months, And Umar b. al-Khattab, 10 years, 3 months, And Uthman b. Affan, 12 years, And dissension following Uthman, 5 years, 4 months, And Muawiya b. Abi Sufyan, 19 years, 2 months (8

The year of the Hagarenes and the time when they entered Syria and took control, :from the year 933 of Alexander, each name, as follows

List no. 26 = the Sasanian rulers to „Boran, daughter of Khusrau. The rule of the Persians was transferred to the Saracens. In the year 6131 of the world and the thirteenth year of Heraclius there began the rule of the Saracens: Mou-ameth, 9 years; Aboubacharos, 3 years; Oumar, 12 years; Outhman, 10 years;  anarchy and war, 4 years; Mabias, 19 years (10

AG 968: The battle of Siffin, between al-Abbas and Muawiya, took place. A great deal of blood was shed on both sides.

AG 973: Al Abbas was killed by his nobles in a conspiracy ; it was at the time  of prayer on a friday , while he was kneeling down in prayer. Muawiya then held rule by himself  for 21 years, including those five years of civil war and  turmoil between himself and al-Abbas.(11

The only contender for supremacy against Muawiyah of whom we have reliable knowledge is Ali, whom Muawiyah fought at the Battle of siffin (36/657 ). The Muslim tradidions provide a wealth of names , both of the caliphs before Muawiyah, and of field commanders. But the historicity of the four first caliphs is highly suspect, an the commanders are placed within an impossible historical framework – the unified conquest from the Hijaz – so that we make little history out of the occurrence of names in the Muslim sources. It is likely that the tales of the Riddah campaigns are back-projections of events that occurred in the period leading up to Siffin

surat al-adiyat ( Q 100 ) offer an excellent example of how the Quranic arabiyya brings forth a dazzling assembly of word meaning and sound defying the contention of both the Arabian saǧ ( rhymed prose ) and the literary rules of classical Arabic literature. It represents the persuasive, arresting construction, pervasive rhythm, and important message of the Quranic arabiyya which has selected and expressed these materials in just this way (1)

As used in the sura, this is typically glossed as “ a spark produced by the hooves of running horses“. In both Biblical Hebrew and Syrica, one of the main meanings of the root q-d-h is fire , or kindling a fire, as shown above. A „lighted fire“ in Syrica is ywra d-qdha ( 5.

The cognate of the Arabic root w-s-t is y-ṧ-t in Biblical Hebrew and Syrica. In Biblical Hebrew it means „to hold out“. These meaning will be proposed as alternatives to the Arabic meaning assigned to this root in the interpretation of Quran 100,5 ( 6

The third verse of the sura in a good candidat for what Lüling calls a second-sense Quran text , a verse that was added by the Quran editoren to obscure the original text and give it a new meaning ( 6

Later writers do not help us date this history more accurately. It is quoted at length by T’ovma in the early tenth century. But , as noted above, the earlier parallels in Lewond are not verbatim quotations. So the existence of the History in its present from before 900 cannot be external evidence ( 5

In that period a certain one of them, a man of the sons of Ishmael named Muhammad, became prominent [t’ankangar]. A sermon about the Way of Truth, supposedly at God’s command, was revealed to them, and [Muhammad] taught them to recognize the God of Abraham, especially since he was informed and knowledgeable about Mosaic history.

Christ has delivered us up, because of the many sins and iniquities, and subjected us to the hard yoke of the Arabians ( 1

Muhammad, the first king of the Arabs, began to reigen, 7 years (2

If Jacob wrote both notices , did he conceive of the first Arab king as a trader? Or did he think he was referring to different Muhammads? ( 4

Jacob , then, writing in the 690s, … Clearly, however, he dose not equate Muhammad with the Arab Religion – there is no indication that the Muhammad who went down to Syria for trading purposes was an Arab prophet – …d Annum 724, preserved at the end of an 8th-century manusscript, allots muhammad ten years as king. (5,…

but we have little indication that the Christians were aware of Muhammed’s existence and significance at this time.  Given the structure of Jocob’s charts, we cannot tell if the notice was written by Jacob or addet a later date in the free space in the side column (6

1 – Mar Jacob ( Bisshop of Edessa): Scholia on Passages on the Old Testament, now first edited in the original Syriac, with an English translation and Notes by George Phillips,London 1864, P.42

So until the times of Heraclius they were plain idolaters. From that time till now a false prophet appeared among them, surnamed Mu}:tammad (Mamed), who, having happened upon the Old and the New Testament and apparently having conversed, in like manner, with an Arian monk, put together his own heresy. And after ingratiating himself with the people by a pretence of piety, he spread rumours of a scripture (graphe) brought down to him from heaven. (1.

My cautious conclusion is that while it makes perfect sense to emphasize the epithetical meaning of the term Muhammad in the Dome of the rock one should not be surprised that its transformation into the name of a post-Jesus Arab prophet materialized so quickly. The fact that we can read the epithet as a name – although only once – already in 691/692 makes it easier to understand that, in the 740s, there was an emergent Islam, complete with Qur’anic exegesis and the beginnings of a Muhammadan prophetic Sunna (2